The Inkspots explore the fine art of the printing press

Share on facebookShare on twitterMore Sharing Servic
“There’s something magic when you pull back that paper — you never know what you’ll get,” says Virginia “Ginny” Furmanski, describing the appeal of the printing press. A machine associated with bookmaking and the Gutenberg Bible and credited with bringing modernity to medieval times may not, at first glance, seem like a tool for visual artistic expression. But the fine-art printmakers that form the artists’ collective known as the Inkspots have harnessed its unique properties to create textured, multilayered and, sometimes, multimedia compositions.

Printmaking covers a lot of territory. There’s relief, whereby a plate or other medium is carved so that the flat surfaces are inked. Woodcuts, the oldest printmaking technique, are created by carving an image into wood. Linocuts are the same as woodcuts, but made with linoleum (valued for its softness and more fluid lines). There’s also etching, engraving, drypoint; the list goes on. “There’s some confusion about the technical aspect of it,” Inkspots member Bay Hallowell admits. “People confuse a print with something mass produced,” Furmanski adds.

The works coming out of the Inkspots’ studio are anything but. Daring compositions, intricate carvings, mixing photography, drawing, painting, watercolor and text to create a single printed image — magical indeed — and interdisciplinary: different techniques and mediums are tools of the trade. Furmanski and Hallowell both appreciate the way the art form merges technical troubleshooting with creative inspiration. “It’s very intellectual,” Furmanski attests. “You have to think in reverse, a lot.” Hallowell adds that “there are a lot of things to adjust and figure out — which is why it’s so fun!”

And, in the world of fine art, affordable. A limited-edition print or even a single monotype will generally cost much less than a painting — think hundreds rather than thousands of dollars — making it more accessible. “It’s on paper, and more affordable, which I think makes art more democratic,” Hallowell explains.

The collective got its start in 2006, a few years after Furmanski moved to Ventura from Manhattan Beach. A retired art therapist, she was itching to create art for its own sake. “On a whim I bought a printing press and put it in the garage,” she recalls. She took classes and got to know other artists in the area, including Betsy Quinn, Judy Gibbs and Karen Brown, who were part of a group called the Odyssey Art League. The four artists banded together to find a studio for fine-art printmaking. The Inkspots officially opened their doors at the Sea Breeze Gallery in 2007 then moved to their current location on Ventura Avenue in 2011. (They share the space with Furmanski’s son, Matthew, an artist in his own right who teaches at California State University Channel Islands.) The collective, which this year boasts 13 members, was spotlighted by Focus on the Masters earlier this month.

Inkspots membership is somewhat fluid. “People come and go,” Furmanski explains. “And they come back. We ask them to commit to a year.” Artists pay a fee for use of the space, equipment and materials (They supply their own paper) and share the various duties, such as chairing quarterly meetings or organizing projects. Members are quite active individually, but come together once a year to do a show. This year’s exhibition, Inklings, runs through Dec. 19.

“I enjoy the synergy of the group,” Hallowell says of her artistic community. “We’re all very different; we have different messages and moods in our art. It’s very stimulating.” Furmanski appreciates having a community in which to create her art. “I just think everyone is very supportive,” she says. “There’s not a lot of jealousy. We’re not competitive — we’re collaborative. We teach each other, and inspire each other.”

When Johannes Gutenberg invented the printing press in the 1400s, he imagined it as a tool for disseminating information, not creative expression. The printmakers that make up the Inkspots have managed to do both. With their annual exhibition up on the walls, now is a great time to explore this age-old, ever-changing technique.
Inklings through Dec. 19 at 643 A Project Space, 643 Ventura Ave., Ventura. For more information, go to inkspotsventura.blogspot.com or email inkspotsventura@hotmail.com.
Posted by ***************************** at 3:26 PM No comments:

Focus on the Masters Discussion

Organized by Mary Galbraith of Focus On The Masters
The Spotlight interview featured the inkspots, our collective made up of area printmakers.
Member Virginia Furmanski was joined by Bay Hallowell and Inés Monguió in a panel discussion led by Dr. Judy Larson.
It was a lively and interesting night that explained the many nuances of printmaking to the crowd in attendance.
The Focus on the Masters afterglow followed at Project 643 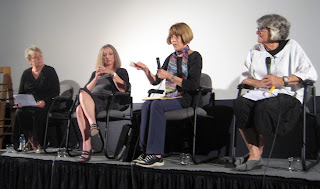 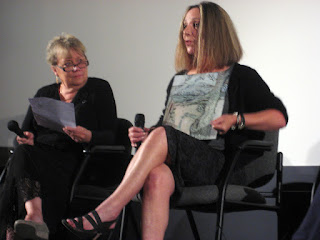 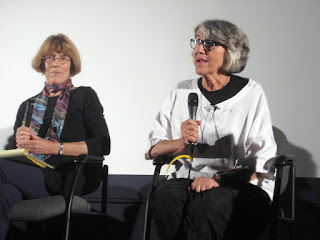 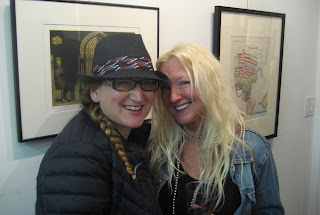 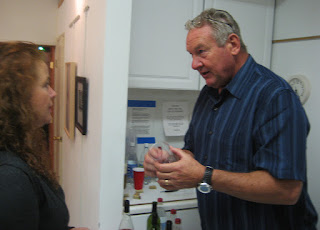 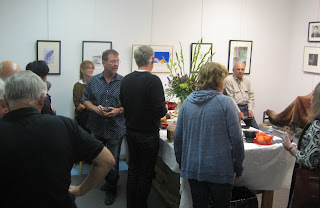 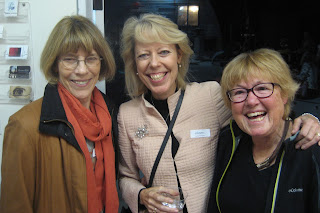 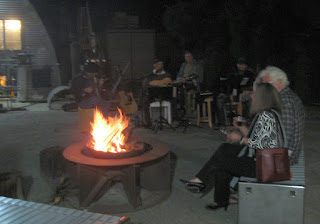 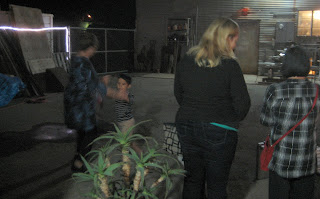 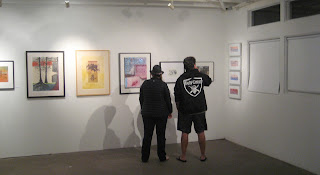 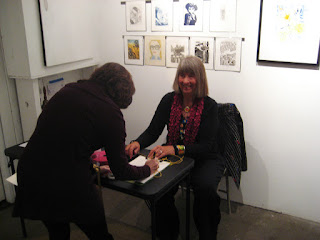 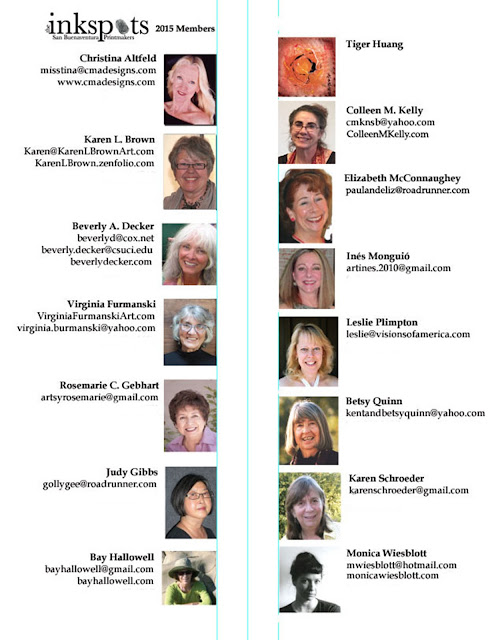 How do you make a linocut?

Deep Sea Diver by Linocutboy. from Hazeleigh Prebble on Vimeo.

What is etching and how do you use a printing press?

Printmaking is the process of making artworks by printing, normally on paper. Printmaking normally covers only the process of creating prints that have an element of originality, rather than just being a photographic reproduction of a painting.
Except in the case of monotyping, the process is capable of producing multiples of a same piece, which is called a print. Each print produced is not considered a "copy" but rather is considered an "original".
This is because typically each print varies to an extent due to variables intrinsic to the printmaking process, and also because the imagery of a print is typically not simply a reproduction of another work but rather is often a unique image designed from the start to be expressed in a particular printmaking technique. A print may be known as an impression.
Printmaking (other than monotyping) is not chosen only for its ability to produce multiple impressions, but rather for the unique qualities that each of the printmaking processes lends itself to.
Prints are created by transferring ink from a matrix or through a prepared screen to a sheet of paper or other material. Common types of matrices include: metal plates, usually copper or zinc, or polymer plates forengraving or etching; stone, aluminum, or polymer for lithography; blocks of wood for woodcuts and wood engravings; and linoleum for linocuts.
Screens made of silk or synthetic fabrics are used for the screen printing process.
Multiple impressions printed from the same matrix form an edition. Since the late 19th century, artists have generally signed individual impressions from an edition and often number the impressions to form a limited edition; the matrix is then destroyed so that no more prints can be produced.
Prints may also be printed in book form, such as illustrated books or artist's books.

Basic etching method
In pure etching, a metal (usually copper, zinc or steel) plate is covered with a waxy ground which is resistant to acid. The artist then scratches off the ground with a pointed etching needle where he or she wants a line to appear in the finished piece, so exposing the bare metal. The échoppe, a tool with a slanted oval section, is also used for "swelling" lines. The plate is then dipped in a bath of acid, technically called the mordant (French for "biting") oretchant, or has acid washed over it. The acid "bites" into the metal (it dissolves part of the metal) where it is exposed, leaving behind lines sunk into the plate. The remaining ground is then cleaned off the plate. The plate is inked all over, and then the ink wiped off the surface, leaving only the ink in the etched lines.
The plate is then put through a high-pressure printing press together with a sheet of paper (often moistened to soften it). The paper picks up the ink from the etched lines, making a print. The process can be repeated many times; typically several hundred impressions (copies) could be printed before the plate shows much sign of wear. The work on the plate can also be added to by repeating the whole process; this creates an etching which exists in more than one state.
Etching has often been combined with other intaglio techniques see Solarplate etching below

Solarplate Etching:
Printmaking with Solarplate is a simple approach and safer alternative to traditional etching and relief printing. Solarplate is a prepared, light-sensitive polymer surface on a steel backing for artists to produce fine prints. All one needs is inspiration, a graphic image created on a transparent film (acetate or glass), sun or UV light, and ordinary tap water, and the process is ready to begin. Both positives and negatives can be utilized; intaglio and relief printing techniques can be applied.
The simple, spontaneous approach also makes it faster and more economical for use in professional printmaking workshops and collaborations with artists. Educators are replacing traditional acid techniques with Solarplate due to safety regulations. Being photographic in nature, Solarplate incorporates a broader range of techniques than any other printing medium.
Posted by ***************************** at 8:00 AM No comments: