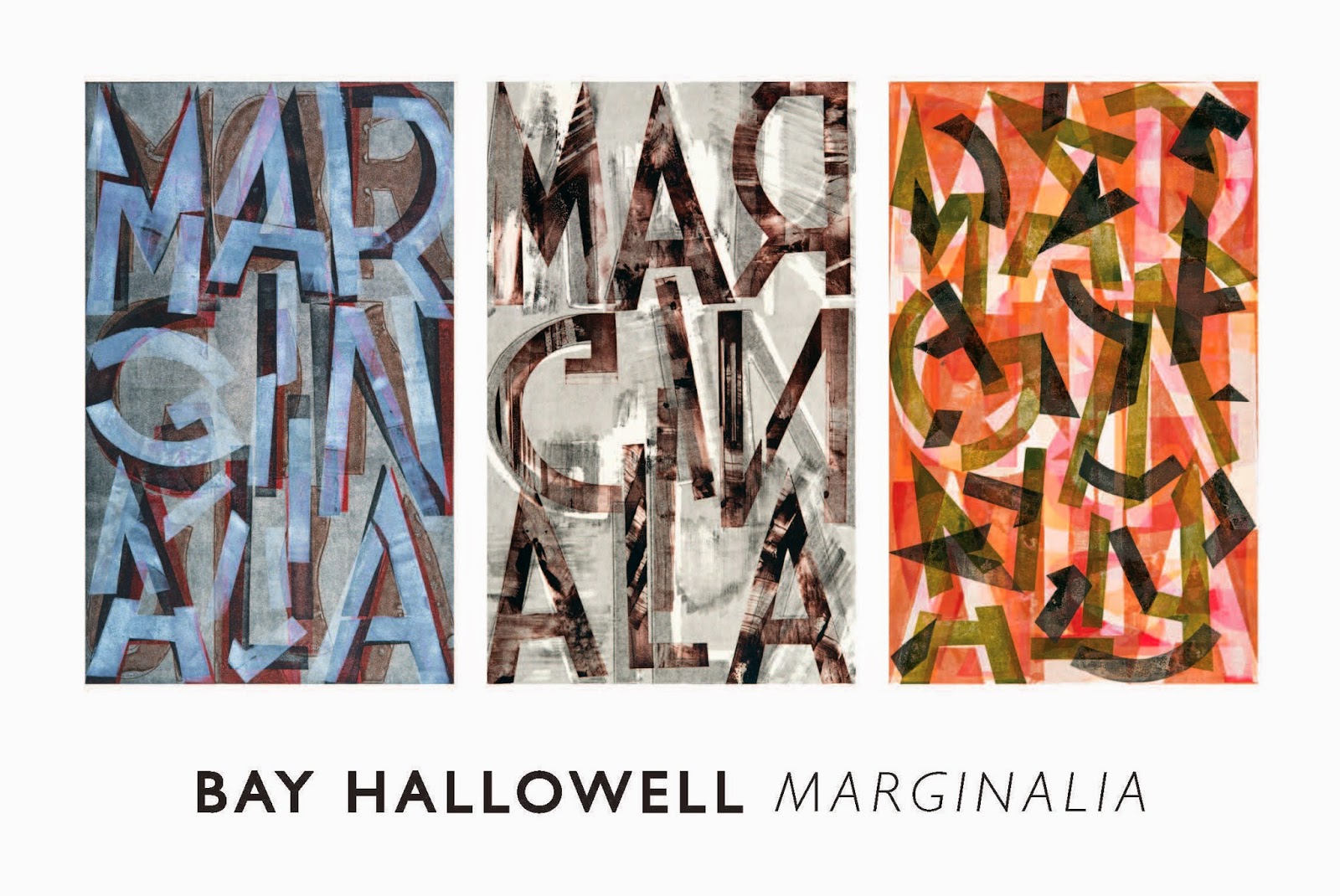 Bay Hallowell is pleased to announce an exhibition of her work,
titled MARGINALIA: Recent Prints,
in the West Gallery of the Santa Barbara Public Library during the month of July.
You are invited to attend a 1st Thursday reception on July 3, from 5 to 8:00 PM.

This series of unique monoprints was inspired by her unexpected encounter with the word “marginalia,” the title of an essay by Glenn Adamson in The Female Gaze: Women Artists Making Their World, an exhibition catalog published by the Pennsylvania Academy of Art in Philadelphia.  Throughout a year of printmaking, Hallowell created more than twenty dynamic, multi-layered abstractions of this word using stencil, collograph, and trace drawing techniques.
She attributes her on-going fascination with words to the sense of pure joy she experienced when she first learned to read.  For her, marginalia evolved from its dictionary definition[1] and from Adamson’s metaphorical focus on women artists, to include a wide range of people, places, art objects and values located in the margins--on the edges--of whatever the main “text” was or is[2].
This new series continues her use of words and letters as a point of departure in making monoprints.  In earlier work, she focused on the word “redact” by forming the word itself with pieces of torn masking tape on a plate, then inking the plate in various ways and running it through a press with paper.  In 2013, when the Redact prints were exhibited at the Leslie Sacks Gallery in Los Angeles, the gallery’s director, Lee Spiro, commented, “(Hallowell’s) work is a perfect balance of aesthetic and conceptual concerns, not unlike the work of Jasper Johns and Ed Ruscha.”
Her 2011 exhibition at the Santa Barbara Public Library, “Tick Tock (R)Evolutions” consisted of a series of prints based on the phrase, “tick tock.”  Critic Josef Woodard observed: “This integrated and evolving series of monoprints brings together fragments of language and semi-abstract imagery, which play off of general ideas of time, clockworks and the cosmos, with nods to proto-Modernist styles such as Orphism and Constructivism.  That’s not to say, however, that Hallowell leans excessively on the cerebral or conceptual: it’s all in good, brain-puzzling fun.”
Hallowell exhibits her prints with the Los Angeles Printmaking Society, Santa Barbara Printmakers, Central Coast Printmakers, Inkspots of Ventura, Santa Barbara Art Association, and Goleta Valley Art Association.  Her prints are collected on both east and west coasts and were recently featured in the Flat File Project at Jane Deering Gallery.
Formerly a museum educator at the Philadelphia Museum of Art and the Carnegie Museum of Art in Pittsburgh, PA, Hallowell has taught and written extensively about art from many periods and places for diverse audiences. She studied painting, drawing, and art criticism at Bennington College in Vermont and completed her M.A. in education at the University of Pittsburgh.  Shortly after moving to Santa Barbara in 2008, she began learning monoprint techniques from Siu and Don Zimmerman in Santa Barbara City College’s Adult Education classes.
[1] Marginalia are scribbles, comments and illuminations in the margins of a book (Wikipedia, 4/28/2014).
[2] I always feel that the margins tell you more than the center of the page ever could.” Marcia Tucker (A Short Life of Trouble: Forty Years in the New York Art World, University of California Press, 2008, page 1.)
Posted by ***************************** at 1:09 PM No comments: 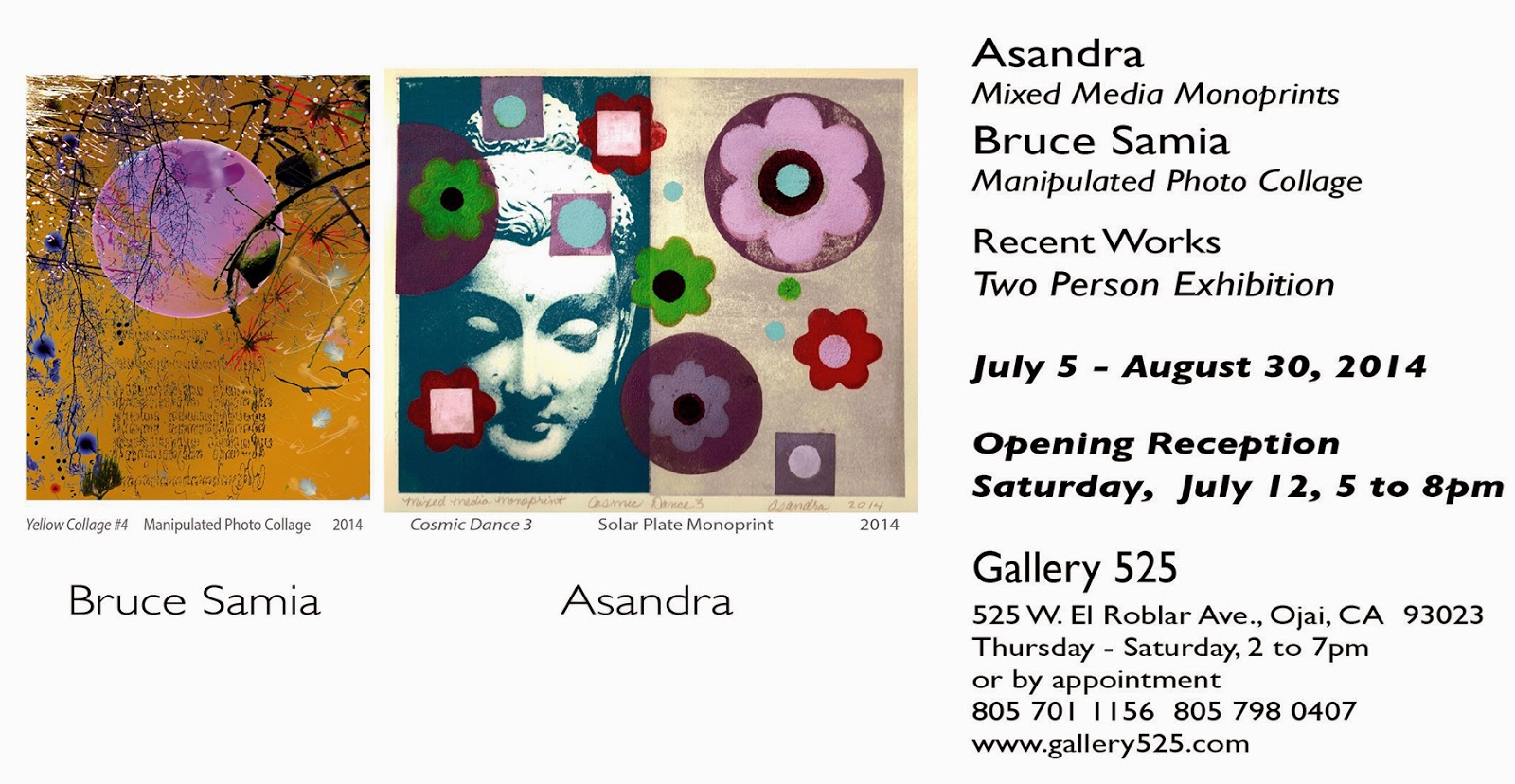